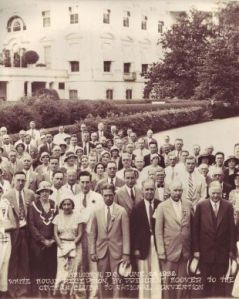 My father, a long-serving and unusually dedicated Civitan Club member and past president, frequently bemoans the declining turnout at his monthly meetings.

After reading John Gravois’s marvelous account “The Lions of Lagos,” I think I’m now slightly better equipped to explain to him why this is occurring.

I even think the factors Gravois cites to account for the headlong decline in U.S. civic engagement also account for another significant development in 21st century American life: our transformation into a post-Morrill nation.

There are reasons why places like Kerala, India, possess Lion club memberships larger than the entire state of Kansas: Civic club activism appeals to people at a critical juncture in their nation’s development.

They are the same reasons why, 200 years ago, frontier America provided the seedbed for civic groups that eventually grew into old standbys such as Rotary, Civitan, Toastmasters and Boy Scouts.  As Gravois oberves:

…the catalysts were industrialization, massive urban migration, the rise of corporations, and breakneck economic growth. Jefferson bumpkins streamed into Hamiltonian industrial cities; a good portion of the Old World’s tired, poor, and huddled masses were freshly arrived too. The social networks that had once served these new arrivals back at home were either dashed to pieces, left behind, or else ill-suited to helping them and advance and associate in this new world.

“It’s the proverbial yokel going to town,” says Anirudh Krishna, a Duke University professor whom Gravois quotes in the article. “His sleeves are too short, he knows his table manners are atrocious, his breath smells like garlic.”

Much as they did in the United States in the 19th century, civic groups in cities and towns throughout many developing nations provide the educational setting in which these provincials learn to shed these undesirable traits and to assimilate into urban life.

As regular visitors to this site probably already have ascertained by now, I think there is a lesson here for Cooperative Extension.

The same impulses that gave rise to civic activism and engagement in the United States in the 19th century also served as the impetus behind Morrill Act, which provided American farming and laboring classes with a dense network of land-grant schools — schools through which millions of ordinary Americans were able to secure higher education and ascend to the professional classes.

These initial gains were strengthened through passage of the Hatch and Smith-Lever acts, which established agricultural research facilities and outreach programs, respectively, on behalf of these groups.  These acts went a long way toward securing the economic and cultural order that not only mitigated these class distinctions but also largely resolved them.

This is the take-home message from Gravois’s article: In a real sense, the success of these legislative acts secured a post-Morrill educational and cultural landscape — not necessarily a hostile landscape but one that will require a rethinking of how Cooperative Extension educators interact with our increasingly sophisticated client base.

We can still function as an agency of empowerment, but not in the ways we have in the past. Our role in the future will be as curators, providing our clients with deeper, more enriched learning contexts so that they can resolve many of their problems on their own.

The fact that Kervala, India, now boasts more Rotary Clubs than the entire state of Kansas speaks volumes about the kind of radically changed environment in which Extension educators will be operating in the 21st century.